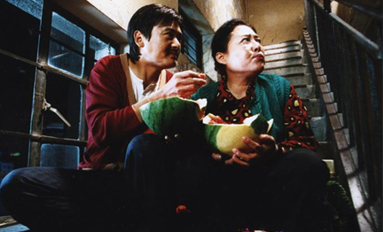 Life is a journey…

Ann Hui have always been an exceptional talent and the pact of realism in her films like “July Rhapsody” pin points her distinct style of direction. In Hui’s pursue for realism, there is always a message that reflects and affects the life of any part of the audience. Whether it is the rebellious teenager years, the struggles of middle age or perhaps the need to adapt into the ever changing world of today, Hui’s films have someone for everyone. In “The Postmodern Life of My Aunt”, Hui ventures into the issue of older people and their struggles to keep up with the rapid growth of modernise cities such as Shanghai. It is a struggle that is relevant to everyone of us and with a brink of the eye, Neo can not imagine what it will be like for him in 50 years time – whether he will be grasping on the comfort of the old or adapting into the ever changing society of the future. The film reminds the audience of our parents, grandparents and realising that ultimately change is inevitable and the struggles that they face are seemingly real and tangible. There is a quote from the aunt, Siqin Gaowin that seems frighteningly realistic – “It doesn’t matter if you cheat me when I am still 17, but if you cheat all my money now, it is like a dead end for me, as I cannot earn it back.” It is all the more shameful and disgusting when the audience think back to all those headlines of fail companies and within those companies there are millions of pensioners who have their entire life saving within.

“My Aunt” is not a film that is all too concerned about the plot, but rather as the title suggests, it is about the journey of one’s life. It is an interesting and fascinating adventure to witness through Siqin Gaowa venturing through one scam after another, until finally noticing how much the world have changed. Shanghai has become ultra commercial and the urban myth about the obsession of money is fast becoming the truth than a random saying. The scenes of Siqin in the car as she look out the window of the commercialize lighting in the night time as well as millions of car lights roaming across the screen like ants coming in and out of their nest. It is a sight that she can never imagine seeing 50 years ago. Ann Hui smartly produces the film in a satirical manner and in many ways the beauty of the film lies in Hui’s use of images to speak louder than words. Perhaps the most shocking scene of all, apart from Chow Yun Fat bedding Siqin, is when we encounter a typically hot chick, before realizing that half her face is burnt. It is a shocking yet sympathetic sight as the audience realize the imperfect nature of humanity and emphasizing on a theme that Hui is stressing upon, what we see if not always what we get.

Siqi Gaowa portrays an immensely difficult role in a rather natural and understated manner as she is torn between the comforts of the old and the frightening prospect of the new. The moment she realizes that Chow Yun Fat is a conman, the expression within her face is worth embracing as she finally realizes that it is a world she can no longer fit in. It is worth noting that despite Chow Yun Fat single handedly lifts the film to another level; it is nothing more than a glorified cameo. It is all the more disappointing that all the trailers emphasize on his involvement in the flick, which once again indirectly alludes to Hui’s central theme of what you see may not be the truth. In another cameo performance, the much missed Zhao Wei plays Gaowa’s daughter in a relatively good performance.

All in all, “The Postmodern Life of My Aunt” is by no means accessible to everyone, but it is ultimately an art flick about the seemingly reality of old age and life. It ponders the audience to question about their future and the fears of old age. The parallel struggles of Gaowa are as close as grandchildren will understand the struggles that our grandparents are going through, until the audience experience it themselves. It is a frightening process to imagine about what was once cool is now totally out of date, but then again who knows what will happen in 50 years time. Perhaps, cars will be flying across the universe, people can walk across the ocean or everything may remain pretty much the same. Ann Hui is to be applauded for creating something so real and so affecting. It is by no means Hui’s strongest work, but it is a film that allows us to explore and journey into the unknown… (Neo 2007)