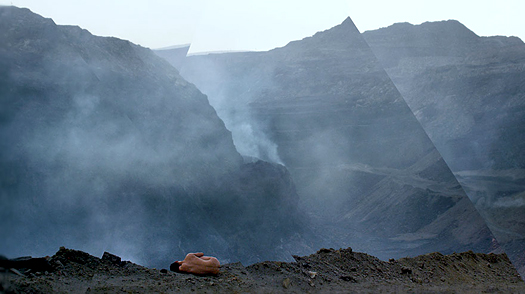 Director Liang Zhao have created a work of art that takes a lot of patience and thoughts before the unavoidable and impending misfortune that is the monster within humanity is revealed to us. While not as figuratively, nature is destroyed, human lives once roaming freely in the vast natural world is now being confined to working in toxic and polluted environments like the coal and steel productions. It is almost sad and teary to witness such predicament to fall upon the weakness, the most vulnerable and the innocence. Corporates and government bounded together in pursue of profits and in this case, the creations of “ghost towns” around China is all the more ironic.

This powerful documentary grows and stays with you. The image of a once healthy man having a happy family with a newborn baby rolling around the vast grass fields and clean air being juxtapose with grey and red chemical pollution that eventually proved fatal. Such is the nature of humankind that as we live in a cynical world this is just an example out of many around the world today. One day our children and their children will no longer be able to live in the world we are in and there will be no one else to blame, but ourselves.

“Beixi moshuo” (aka “Behemoth”) is a fitting film to be shown at Venice as they are now in the midst of a “living decay” with tourism over-exceeding what the islands can hold and soon all the beauty and whatever that is left of the Venetian culture will be sunk into the sea, lost for the value of more profits. Similarly, themes are relevant, but for the people of this Chinese town, their lives forever ruined and nobody is willing to help or assist. I have always believe that films and documentary have a huge role to play in society to express relevant social concerns to the wider public and in making “Behemoth”, director Liang Zhao succeeded and deservingly picked up the Green Drop Award at Venice 2015.